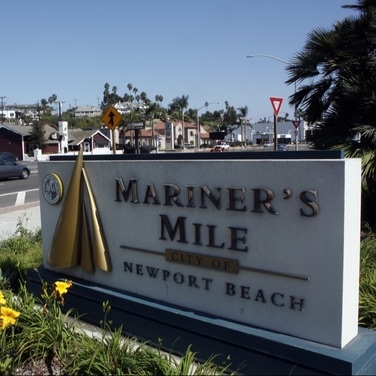 Located between Newport Boulevard and Dover Drive, this bayside strip boasting harbor and marina access has become a prime location for locals and families who enjoy having a retail and commercial district in their backyard. And with so many new businesses springing up, there’s never a shortage of things to do.

​This iconic stretch of Pacific Coast Highway, known as Mariner's Mile, aptly named for its nautical history, retains a casual beach atmosphere, and is home to trendy restaurants and locally-owned shops.

More than 100 years later, Newport Beach's harbor is crowded with pleasure, fishing and tour boats, and its streets are busy with shoppers browsing at Fashion Island mall, tourists enjoying Balboa bars on Balboa Island and surfers tackling The Wedge or other hot spots along the city's 6.2 miles of beaches.

Newport wasn't always such a desirable place. In the mid-1800s, the state of California sold parts of Harbor, Balboa and Lido islands for $1 an acre as "swamp and overflow land," according to the Newport Beach Historical Society.

The McFaddens saw something else. In 1888, they decided their shipping business would be more successful if they moved it from the inner shores of the bay to the oceanfront, where they could build a wharf. McFadden Wharf soon became the largest business in newly created Orange County, according the the historical society.

In August 1906, residents in the booming bay town voted to incorporate. The vote was 42-12 to become the city of Newport Beach. Back then, bayfront houses sold for as little as $500.

Residents identify closely with their "villages" - including Corona del Mar, West Newport and the Harbor, Lido and Balboa Islands - rather than Newport Beach itself.

One hundred years after the McFaddens built what is now Newport Pier, the city still revels in its ocean roots. Back then, only a few dozen summer cottages could be rented, and a few dozen people called Newport home.​

Today, Newport Beach is home to almost 90,000 residents, who continue to value its incomparable climate and amenities.

We need your help to Respect, Protect and Preserve The Residential, Commercial and Environmental Qualities Of Our Bayside Town

Fill out the form to get in touch with us.